Soil Science Latest: How Can We Sequester More Carbon and Build Soil Health?

At the Wageningen Soil Conference in August 2019 we listened to many brilliant talks on the latest soil science; some of which were incredibly relevant to farmers. We want to share what we learnt with the Agricology community!

We have all heard of words like humus, humic acid etc. in terms of soils and carbon stored in soils. Well it turns out in the words of Johannes Lehman, soil scientist at Cornell University, “humus is dead.”

He was very clear that it’s false to think there is such a thing as a long term carbon store that is locked up forever.

The idea that stored organic carbon can be neatly separated into 3 different types (rapid, labile, stable), which has been the model for many years, is not reflected in the research any longer.

We shouldn’t worry about the idea of building long term carbon vs short term carbon, essentially all carbon that is sucked into the soil via photosynthesis or decaying organisms has the potential to become long-term carbon. What actually matters is which microorganisms are present and what they do with it.

There is no clear silver-bullet pathway to locking up carbon for good, instead we can think of soil organic carbon (SOC) as an ongoing cycle of carbon gains and losses which we need to constantly manage. To many farmers this may not come as a surprise - that is exactly what we have seen happening in the field. As we practice more regenerative approaches such as minimising soil disturbance, maintaining living roots in the soil and ensuring plenty of plant residues on the surface we are quickly seeing the advantages of healthier soils which is so often synonymous with higher soil organic carbon and a more alive soil system (i.e more microorganisms).

Johannes showed that soil management techniques on-farm to improve food security can have large beneficial effects on soil organic carbon. He drew from an example of changing agricultural practices in Ethiopia where they have been implementing agroforestry, diversified cropping systems, terracing, and many other agroecological practices - first and foremost as a measure to decrease poverty and prevent future drought scenarios. The project was undertaken on 600,000 hectares and had many benefits to the community, food security as well as environmental rehabilitation. However Johannes pointed out that it also had an unintended positive effect of sequestering significant amounts of carbon helping Ethiopia to meet their climate targets. 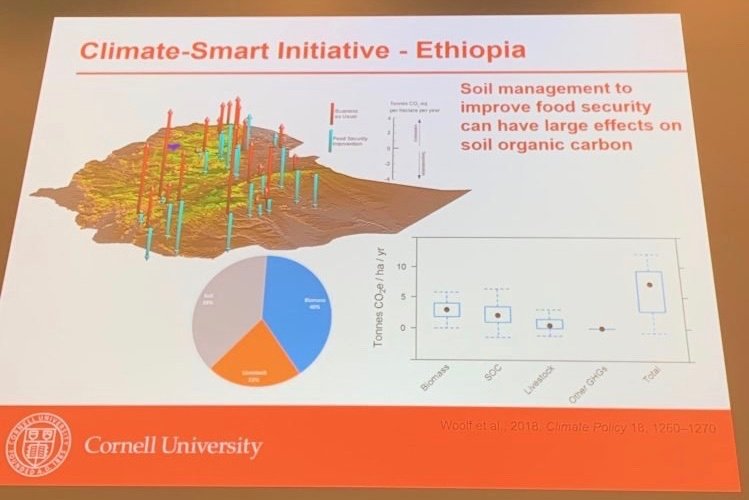 We discussed these findings with Elizabeth Stockdale, Head of Farming at NIAB, and she gave the analogy that this implies we need to think of our soils like a current account - you are constantly making deposits and withdrawals of carbon, and that will be reflected in your carbon balance. From a farming perspective, what I wanted to know is what is the interest rate on this current account? That essentially would reflect how effective we will be in the long run at sequestering carbon in soils and building up our SOC. The banking analogy also makes a lot of sense, as it reflects the fragility of soil carbon in the face of larger scale disasters and fluxes in the market, as everything can be ‘lost’ at any time.

In summary Johannes Lehmann’s work showed that the focus of building SOC should be on-farm ‘short-term’ carbon cycling interventions (e.g minimising tillage, cover cropping, leaving plant residues, agroforestry, composting applications, rotational grazing) and the microorganisms will do the work to build longer term carbon deposits from there! Unfortunately this new understanding of SOC and the value of microorganisms has not been incorporated into IPCC models yet, so the value of these practices aren’t fully taken into account in global carbon targets…but Johannes said it will all change quickly.

The Soil Microbial Carbon Pump - how do microorganisms affect carbon storage in soils?

One model put forward for understanding the effect of microorganisms in sequestering carbon in soils was the Microbial Carbon Pump, explained by Chao Liang from the Chinese Academy of Sciences. The Soil Microbial Carbon Pump is a model for understanding how microbes are an active player in soil carbon storage. Chao showed how it could be applied at many different scales from the rhizosphere (plant root-soil interactions) to the field and landscape scale, which could have implications for understanding the responses of ecosystem carbon processes to global environmental changes. 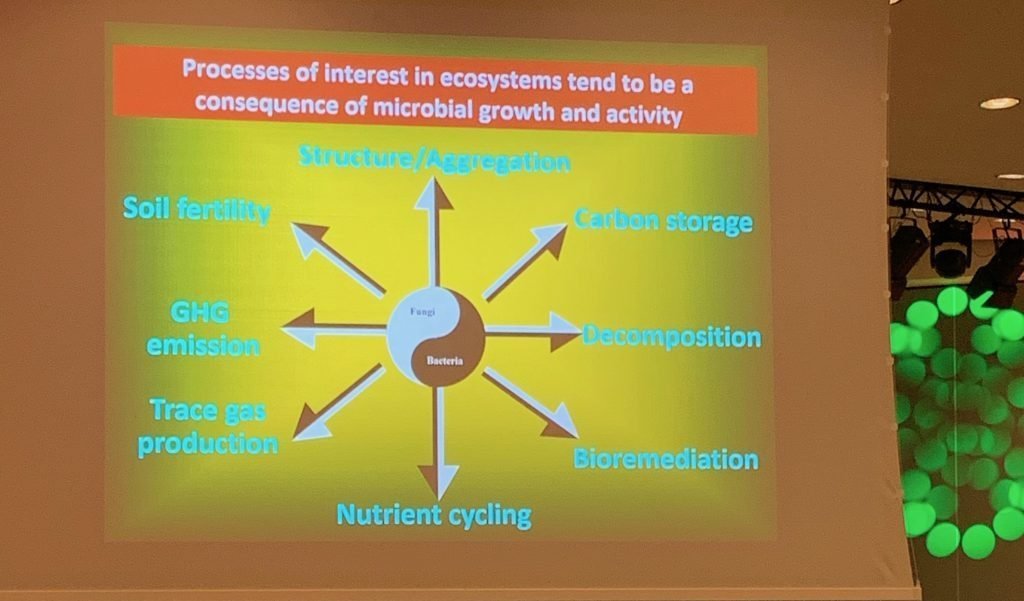 My interpretation of what he was saying is that there are two types of carbon sequestration pathways through soil microorganisms:

Read more in this paper: The Importance of Anabolism in Microbial Control over Carbon Storage3 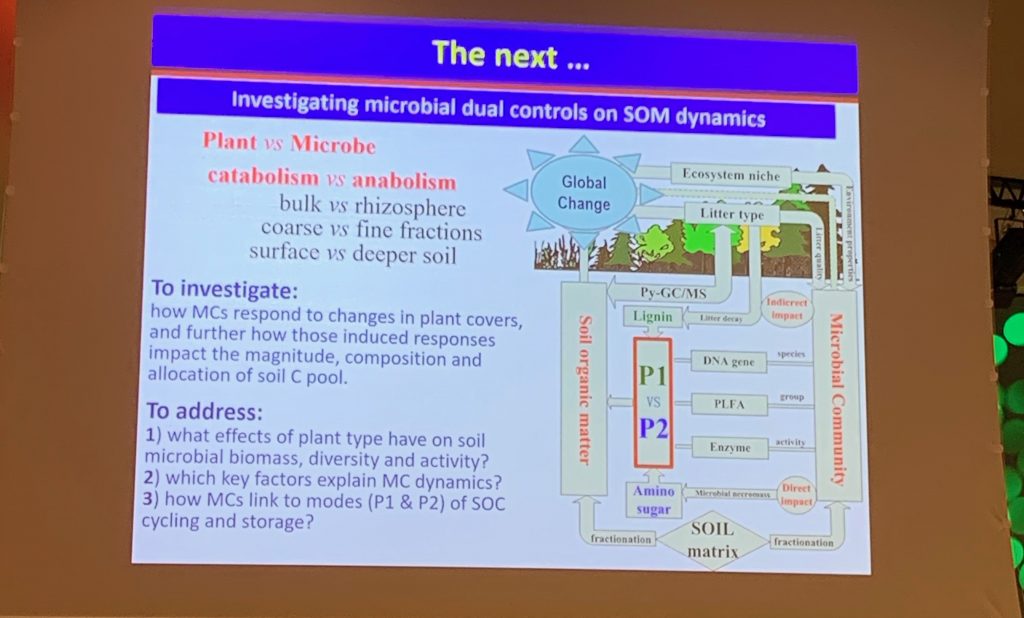 Chao showed how this model allowed them to investigate the effects of plant covers on microbial communities and what that meant in terms of the magnitude and composition of the soil carbon pool. He outlined that once the Microbial Carbon Pump processes carbon, it will either be released back to the atmosphere as CO2 - known as the priming effect (i.e decreasing the storage life of the carbon) or further increase the storage life of the carbon - known as the entombing effect. Their results showed that as the fungal proportion in the microorganism community increases the amount of carbon that goes through the entombing effect and becomes longer term carbon significantly increases after a certain time and then remains constantly high, whilst the priming effect although initially peaks, it then decreases and falls significantly below the entombing effect (you can see this in the photos below, where the high fungal content soil sample is the middle graph, highlighted in red)

Essentially what that means is that in soils with a higher proportion of fungi, the carbon is more likely to be turned into longer-life carbon deposits.

What does this mean for farmers?

The scientists are saying that yes it’s all about building microbial communities if you want to increase SOC.

There is no silver bullet, but it will take new management strategies based on careful monitoring of carbon gains and losses and making sure you are building more carbon on a field than you are taking away.

We can very much see ourselves as key actors when it comes to reducing greenhouse gas emissions and sequestering carbon at a global scale and that employing methodologies that improve soil health and soil microbial communities are the best way to do this. Of course, we already know this is what regenerative agriculture, conservation agriculture, permaculture and so many other farmer-led practices are all about! But it’s good to know the scientists are behind it all, and we hope this will enter the minds of the policy makers sooner rather than later!

We learned a lot from the conference and you will see some changes to Soilmentor in the coming months as we reflect some of our learnings to bring you some new tools to help you understand what your soil monitoring results mean.

Abby Rose is a physicist farmer who thinks ecological farming is the key to a resilient future. She writes:

"I grew up in Cheshire but now my family farm at vidacycle in Chile. It was through learning to run a farm that it dawned on me - farmers are basically in charge of our Earth’s future, everyone is invested in the future of farming. I am committed to a thriving ecological farming community so: I developed the vidacycle tech apps to use on farm to collect important data out in the field, including Soilmentor, an app that enables farmers to monitor their own soil health; I co-create an award-winning monthly podcast Farmerama Radio which shares the voices of independent farmers; and I'm part of the OurfieldProject founding team, where 40 people co-farm an arable field in Hertfordshire, so everyone can learn what’s really behind a bag of flour.  I live in the UK most of the year and spend lots of my time visiting farmers, hearing their stories and understanding how they run their farm. I believe that through shared experiences like these we can transform the narratives of our food and the earth."

More about the organisation

partner Farmerama Radio is an award-winning monthly podcast sharing the voices of independent farmers in the UK and beyond. At Farmerama we are committed to positive ecological futures for the planet and believe that the farmers and growers of the world will determine this. So we make a monthly podcast which gives producers a voice and shares ideas in a fun and informative way - that way, farmers can learn from other farmers. We want to rejuvenate the respect, confidence and vibrancy of independent farmers and rural communities. Plus, everyone can learn about the multitude of decisions producers make and how this affects all of our lives. This is community-sourced radio. We encourage farming communities to share the things they know and are learning about, and learn about making radio and storytelling in the process. We then curate the stories into a monthly podcast.

The information contained above reflects the views of the author/s and does not necessarily reflect that of Agricology and its partners.

The following blogs share some of the same themes.