Over 970 farmers took part and recorded 112 species across around 900,000 acres. That’s more farmers than in previous years.

What did farmers see?

The most commonly seen species were blackbirds and woodpigeons, seen by over 80% of our participants. Robins, blue tits, and carrion crows were seen by over 70% of the farmers.

The table below shows the full list of the 25 most commonly seen species. 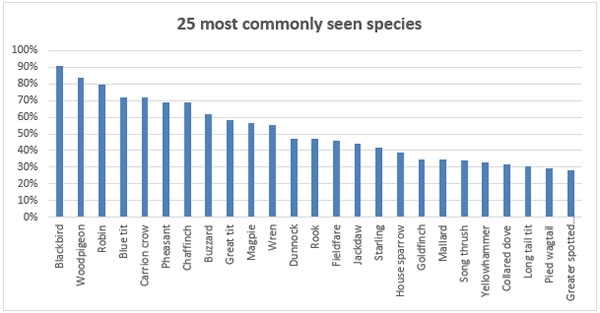 At the other end of the scale, we were delighted to see that a total of 22 species from the Red List for Birds of Conservation Concern were recorded, with 5 appearing in the 25 most commonly seen species list: fieldfares, starlings, house sparrows, song thrushes and yellowhammers. The most abundant of these were the first two, which were seen on over 40% of the farms taking part.

The five most abundant birds seen were woodpigeons, starlings, fieldfares, rooks and chaffinches. A total of 104,993 were found, making up over 40% of the total number of birds recorded.

It is interesting to note that this top five list is very similar to previous counts, with chaffinches reappearing on the list this year, pushing lapwings down to sixth place.

8 of the top 25 most abundant species are on the Red List for Birds of Conservation Concern: starlings, fieldfares, lapwings, linnets, redwings, herring gulls, yellowhammers, and house sparrows. 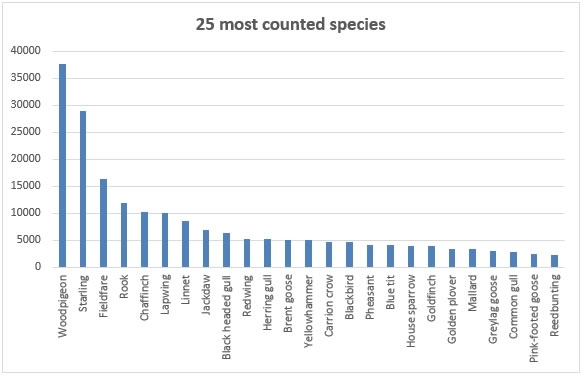 The type of farms taking part reflected the full range of farm businesses we had hoped to see.

The average farm size of those taking part was 959 acres, with over 65% growing arable crops, nearly 50% having beef or sheep, and nearly 15% growing field vegetables. There were also a number of dairy farms, horticulture units, poultry producers and pig producers submitting counts. We are really pleased to get such a variety of interest.

Nearly 60% of participants are in some form of agri-environment scheme, demonstrating their long-term commitment to environmental management.

38% of participants were providing some form of extra seed feed for birds, either through growing wild bird seed mixes, or by providing additional grain through scatter feeding or via hoppers.

Where were they from?

Farmers from every county in England took part and there were also responses from Northern Ireland, Scotland and Wales. We also had 28 farmers from Austria take part!

Suffolk had the most returns, with 80 farmers completing the survey. This was followed by Norfolk with 57, Herefordshire with 52, and Yorkshire with 49. Our thanks go out to these counties for their huge support